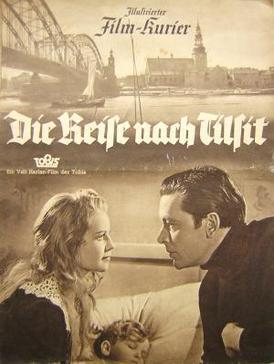 Die Reise nach Tilsit (The Trip to Tilsit) is a 1939 film from Germany directed by Veit Harlan.

Endrik is a fisherman on the Baltic coast of East Prussia. He has an angelic, beautiful blonde wife, Elske, and an apple-cheeked son, Jons. But trouble has entered into this happy home in the person of Madlyn, a Polish tourist. Endrik and Madlyn are engaging in a passionate love affair, which not only Elske but everyone in their little fishing village knows about.

Elske considers divorce, but refuses to hand over custody of Jons to Endrik. Meanwhile, Madlyn demands that Endrik separate from his wife once and for all. Elske's father for his part is so incensed by the affair that he attacks Madlyn with a whip. This brings matters to a head, as Endrik decides that the only way to get out of his marriage and keep custody of his son is to kill his wife.

Note how in this movie, made in Nazi Germany shortly before the Germans started World War II by invading Poland, the scheming seductress villain is Polish. Die Riese Nach Tilsit is an adaptation of a German short story of the same name. Twelve years earlier, the same story was adapted into an Oscar-winning American film, Sunrise.