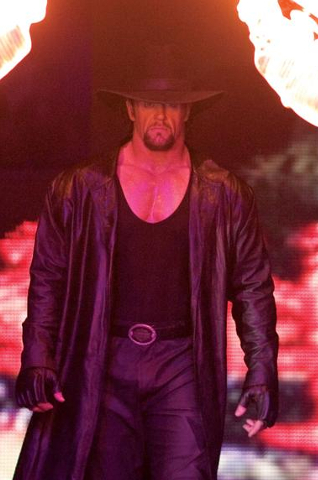 There ain't no grave can hold my body down...
"Here was the difference between The Undertaker and every other performer on the roster: The Undertaker didn't sell. There was no visual indication that his opponent's moves were having any kind of real effect on him, and it made the character feel eerily indestructible, never more palpable than the moments of his eerie sit up, a move directly inspired by Michael Myers, in which The Undertaker would be on the receiving end of a devastating piece of offense, only to rise back to life. The sit up was a trademark of any Undertaker match, the moment his opponent's momentum was broken, and they'd remember they were in the ring with the Deadman."
— Super Eyepatch Wolf, "The Undertaker: Long Term Storytelling in Wrestling

Mark William Calaway (born March 24, 1965) is a American retired professional wrestler who is the longest-tenured performer in WWE history, working under the name The Undertaker for over three decades with the companynote To put that in perspective, he was the last performer who appeared on the very first Monday Night Raw to still be working for the company as an in-ring talent. He is one of the most memorable and recognizable superstars in the company's history.

He and his (kayfabe) "half-brother" Kane were the last two holdovers from WWE's "Rock 'n' Wrestling" era of high-concept, comic book-style wrestling gimmicks, a decade thought to have perished with the Boogeyman. Even though an undead "zombie wrestler" with mystical powers sticks out like a sore thumb in the so-called "Reality" Era, fans still adore it anyway. Undertaker shed the voodoo gimmick for a more true-to-life one ("The American Badass") between 2000 and 2003, but he returned to it in 2004. He has also wrestled as a cult leader (the "Ministry of Darkness" angle) and a warlock. Yes, a murderous zombie cowboy biker priest who wrestles.

After his loss to Roman Reigns at WrestleMania 33, the Undertaker initially retired from wrestling. However, he changed his mind and resumed his career on a semi-retired status, willing to appear and even wrestle when he considers the match and opponent worthy. On November 22, 2020, thirty years since his debut at the first Survivor Series, The Undertaker formally announced his retirement, stating "My time has come to let The Undertaker rest in peace" and walking away from the ring one last time. Over a year later, it was announced that the Undertaker would be inducted into the WWE Hall of Fame class of 2022.

When WWE crafted its controversial "50 Greatest Superstars of All Time" DVD set, the company polled its roster to create the list. Undertaker was #2 on the list — #1 was Shawn Michaels.

Not to be confused with The Coroner.