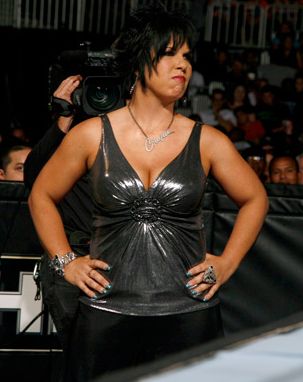 She started off by making cameos in the feud between her then-husband and Rey Mysterio Jr. and became involved in the company full-time as a heel in 2006 after acting as the occasional peacemaker in the controversial feud between Chavo Guerrero and Mysterio. She later went on to have storylines with Edge and later LayCool . After spending some time managing for Dolph Ziggler, later becoming the managing supervisor of RAW but was fired from that position in July 2013. She then became the General Manager of Smackdown, until June 2014, when she was fired for the last time by Stephanie McMahon and left the company.

Vickie made one-off appearances with WWE in 2016 and 2018. In late 2019, she signed on with All Elite Wrestling, and appeared as a guest commentator for an AEW Dark match in December 2019. At Fight For the Fallen 2020 she revealed herself as the new manager for former Women's Champion Nyla Rose.

On a September 2020 appearance on The Lone Star Plate Podcast

Vickie Guerrero shares many details of her journey and what's important to her.

It is my pleasure to introduce to you: Tropes associated with Vickie Guerrero!