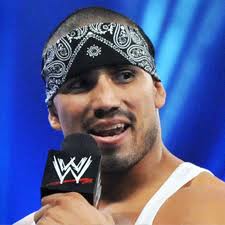 Jorge Arias (born September 5, 1977) is a Mexican-American professional wrestler, who worked for WWE under the ring name Hunico. Prior to signing with WWE, Arias was better known under the ring name Incognito, under which he mainly worked for the professional wrestling promotion Asistencia Asesoría y Administración (AAA) in Mexico and Chikara in the US as well as working for various independent promoters along the US-Mexico border and even further into USA such as Ring of Honor as Incógnito. Arias originally wrestled in Mexico under the name "Místico", making his debut under that name around the same time as the much more well known Místico of Mexico City. At times he was billed as either "Mystico" or "Mistico de Juarez" before signing with WWE. In December 2013, he returned to role of Sin Cara, and under that gimmick became part of the team, the Lucha Dragons alongside Kalisto, the team previously winning the NXT Tag Team Championship.

Arias, as Sin Cara, was released from WWE on December 8, 2019, after having requested it a month prior. Shortly afterward, he returned to AAA, now using the name Cinta de Oro.

Tropes associated with Hunico include: