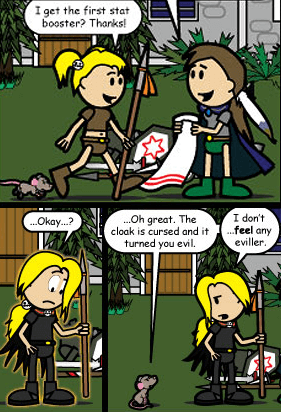 Jyrras: Remember that time you thought Alexsi went evil because she wore a black dress?
Dan: Oh come on! I was twelve!
Jyrras: The other time.
Dan: Hey! I was very drunk!
Jyrras: No, Dan. The other time.
— Dan and Mab's Furry Adventures, #749

A specific form of Evil Costume Switch, one that requires no effort whatsoever on the part of the newly evil party.

See, your Transformation Trinket, your Empathic Weapon, and your costume aren't too happy with your Face–Heel Turn. Being inanimate objects, though, the only way they can express their disapproval is to turn black and evil-looking — goodbye Frills of Justice, hello Spikes of Villainy. The transformation usually, if not always, happens right before your eyes and those of your astonished friends, just for dramatic flair.

A possible variant is when a character happens to be split between good or evil or gain an Enemy Without (sometimes just for a Mirror Match); the Evil Twin (or both) might immediately get Color-Coded for Your Convenience in the process. In visual media, it naturally helps the viewer telling apart the good guy and the bad guy.

A Sub-Trope of Convenient Color Change and Evil Makeover.

This trope is named for The Rolling Stones song "Paint It Black", although the song itself is completely unrelated to the trope, being about grieving a loved one's death. For the Nancy A. Collins novel (also named after the song), see Sonja Blue. It is also unrelated to Ron the Death Eater, formerly known as the other thing named after the same song ("Paint the Hero Black"), which involves more than a costume change.

Important Note: Please read the trope description before adding any new example. It is NOT about characters getting a new black (or even darker) outfit. It's about a costume/color change being spontaneous. Unfitting examples will be removed.

Don Flamenco was so pissed off that Little Mac defeated him that he came back dressed in black for their title rematch.

Don Flamenco was so pissed off that Little Mac defeated him that he came back dressed in black for their title rematch.