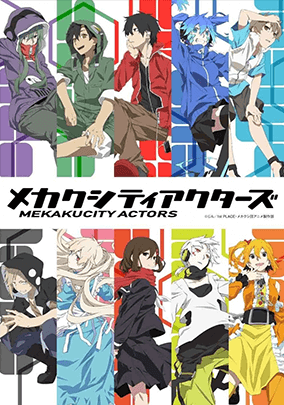 Shintaro Kisaragi is a hiki-NEET who hasn't left his home in two years after a certain incident. He spends his days drinking soda, browsing the internet, and being bothered by Ene, the girl living in his computer. After her actions cause him to ruin his keyboard on a holiday when he'd have to wait five days for an online order to ship, he's forced to choose between going without his computer, or going outside to buy a new keyboard in person. Reluctantly choosing the latter, he inadvertently gets involved in a hostage situation that sparks the beginning of something more as his life begins to collide with that of his idol sister's as they get involved with the Mekakushi-dan, a group of teenagers with mysterious powers.

Mekakucity Actors is an anime in the Kagerou Project series airing in the Spring 2014 Anime season, produced by Studio SHAFT and directed by Akiyuki Shinbo. Outside of Japan, the series streamed on Crunchyroll, but was taken off the service in 2021. Funimation continues to stream the anime, however.

Please only list down tropes relating to the anime here. If it refers to the series as a whole or the light novel and manga adaptation, please list them down on their respective pages.