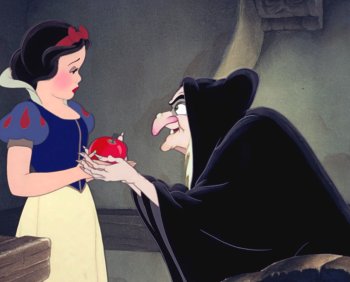 Careful, Your Highness. Her robe is a clue that eating that apple is not a good idea.
A dozen soldiers of Zarkendorf's private army stood at attention in their black velvet unitards, black jackboots, black helmets with black visors, and black gauntlets gripping sinister black machine-rifles. The fashion designer who tried to tell Zarkendorf that pink was the new black had been immediately executed.
— Plan 7 of 9 from Outer Space
Advertisement:

Black is perhaps the most typical color for evil, or at least the antagonists, to wear. Thus in many stories, the villains will wear largely black clothing most of the time, in contrast to the colors worn by neutral and good characters (which will be at least moderately lighter).

This is because, in many cultures, black is the color of darkness, decay, and death. Thus even though wearing black doesn't make someone evil, being evil makes it more than likely one is going to wear black.

It doesn't matter if it's all the villains, the Big Bad and a few others, or just a group of Mooks that appear for a few episodes, if they wear a large amount of black (even just one noticeable part of their clothing), you know it's this trope. This is also why black is a common color for an Evil Costume Switch.

Heck, some Eviler Than Thou villains might wear black when the "lesser" evils don't.

There's some science behind this.

There are studies that show that people that wear black are more aggressive than people who don't. They've also found that black isn't only associated with evil, but also contamination and sickness. These associations give people an instinctive cue that the person wearing black is dominant, and somebody you don't want to mess with. note Note that these associations may be cultural, as historically other colours, including white, had these connotations instead, and in some cases still have, while black is associated with neutrality and even outright heroism in some cultures.

This trope very often involves a good chunk of Color-Coded for Your Convenience — whereas villains are dressed in black, heroes or innocent characters will wear white or light and bright colors.

Now since some think Evil Is Cool, then black can also become a cool color, but those don't cover this trope, nor does this trope come into play if the heroes also wear black. This can come into play with a Villain Protagonist though.

A Sister Trope to: