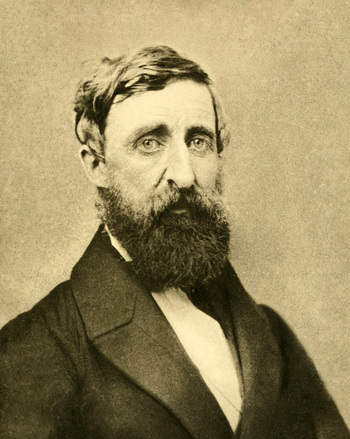 "Our lives are frittered away by detail. Simplicity, simplicity."
Advertisement:

Henry David Thoreaunote Pronounced "THU-row" (like "thorough"), though most modern people pronounce it "thu-ROW." (July 12, 1817 – May 6, 1862) was an American writer, philosopher, transcendentalist, Nature Lover, and ecologist. His work on environmental history and ecology formed much of the early framework for modern environmentalism. A lifelong resident of Concord, Massachusetts, he spent two years at Walden Pond in a cabin he built for himself as an experiment in simple living, and refused to pay taxes as a protest against the Mexican-American War, which he viewed as an attempt to add more slave states to the Union. In the process, he coined the term "Civil Disobedience".

Due to his huge influence on both modern-day ecology and how people view their government, nearly all sides of the political spectrum would like to claim Thoreau as one of their own. Take caution when someone tries to tell you what Thoreau "probably" would have believed if he were alive (and in some cases, what he did when he was alive).

He was a friend of Ralph Waldo Emerson, who helped Thoreau shape his beliefs.

His most famous works include: