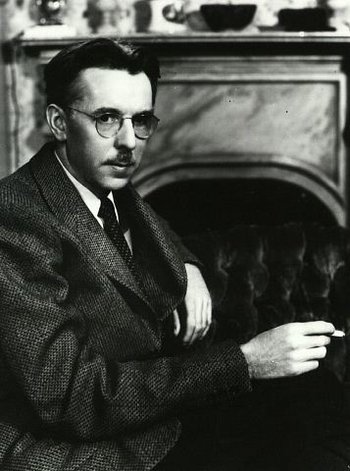 "I'm not an artist. I'm a painstaking writer who doodles for relaxation."
Advertisement:

James Grover Thurber (December 8, 1894 – November 2, 1961) was an American humor writer and cartoonist. Among his well-known works are the short story "The Secret Life of Walter Mitty" and the children's fantasy novels The 13 Clocks and The Wonderful O.

A Columbus, Ohio native, Thurber graduated from Ohio State University, after which he worked as a code clerk for the U.S. State Department in Washington and then at the U.S. Embassy in Paris during World War I. Following the war, he worked as a reporter for the The Columbus Dispatch before turning to fiction.

In his own time Thurber's writing and art were often associated with The New Yorker magazine, where many of his short stories first appeared. Many of Thurber's fictions, such as "Walter Mitty," "A Couple of Hamburgers," and "The War Between Men and Women," deal with the fundamental conflict between men and women, and the romantic vs. practical mindset represented by each, respectively. His works are also colored by his liberal individualist views, in a time when creeping nationalism was threatening personal freedom in many parts of the world — some not entirely remote — and are also characterized by a deep sympathy for animals, particularly dogs.

Thurber was legally blind due to a childhood accident with a bow and arrow (a William Telling stunt Gone Horribly Wrong), but that didn't stop him from having success as a cartoonist for The New Yorker. He was famously self-deprecating about his lumpy art style, noting with amusement that parents who saw his cartoons would submit their children's drawings to be published, thinking they were equally good. He would reply, "Your son can certainly draw as well as I can. The only trouble is he hasn’t been through as much."

A personal favorite writer of one Keith Olbermann, who single-handedly sparked enough popular demand to put Thurber's anthologies back into print in the late '00s, when he revealed that he would read from a book of Thurber's stories to his terminally-ill father, who suggested he read some of them on his TV show.

Works by James Thurber with their own trope pages include:

Works inspired by James Thurber with their own trope pages include:

Other works by James Thurber provide examples of: