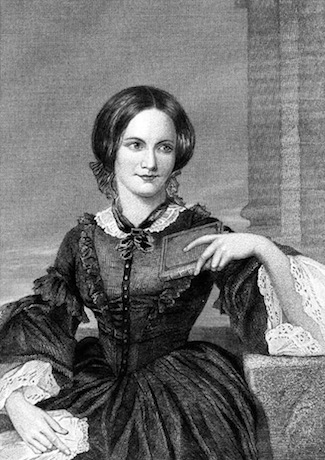 The one who wrote Jane Eyre.

Charlotte Brontë (21 April 1816 – 31 March 1855) was the daughter of an English clergyman. She had two older sisters, Elizabeth and Maria, who died in a tuberculosis outbreak at their Boarding School of Horrors. Charlotte was also there, witnessed their suffering, and memorialized them and the school in Jane Eyre. She also had two younger sisters, Emily Brontë and Anne Brontë, and a brother, Branwell.

All the surviving kids (and the two older sisters, by all accounts) were master Worldbuilders at a very young age. Taking off in 1826 from a set of toy soldiers, a couple of geography books, and magazine articles about Bold Explorer Mungo Park

, they colonized the west coast of Africa and called it the Glasstown Confederacy, later Angria

. The adventures of the "Young Men" and later The Duke of Wellington's son Arthur

, whom they elevated into a veritable demigod, were set down in a set of handmade books

about the size of a large postage stamp.

.) Later, Emily and Anne split off and discovered Gondal, a huge continent in the Northern Pacific. These narratives were lost but for a few dozen poems

. It's easy to see the origins of Wuthering Heights and Jane Eyre in these narratives, which went on for their entire lives.

Charlotte ended up spending most of her adult life as a teacher; at the girls' school she had graduated from, then as a governess for rich children, and briefly as a teacher at a private school in Brussels.

She first began publishing under the pseudonym "Currer Bell" in 1846 when she, along with Anne and Emily, published a collection of their poetry. A year later, in 1847, she published again as Currer Bell, this time a novel, her most famous work: Jane Eyre.

Jane Eyre received criticism from some of her contemporaries, but was fairly widely regarded and overall a sucess. However, Charlotte's brother and her younger sisters, Emily and Anne, soon died (all from tuberculosis), leaving Charlotte and her father as the only surviving members of the family.

Charlotte revealed her identity to the London literary circle, and began to meet with figures such as Elizabeth Gaskell and William Makepeace Thackeray.

She went on to publish Shirley, Villette, and The Professor, and to marry Arthur Bell Nicholls, a colleague of her father who had given her an Anguished Declaration of Love. Charlotte was probably pregnant with her first child when, tragically, she died - possibly from typhus, possibly from dehydration and malnourishment as a result of severe Morning Sickness.

One of the most important writers of her time and an early feminist writer makes her Short-Lived, Big Impact. George Eliot singled her out in Silly Novels by Lady Novelists as one of the three female novelists of great skill unlike those whose faults she was dissecting.