You Will Not Evade Me 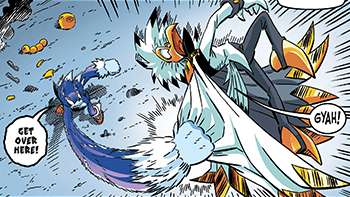 This trope specifically refers to a case in which one fighter magically, psychically, or physically forces his or her target to move to the fighter's location, often setting the victim up for a No-Holds-Barred Beatdown.

Sometimes your opponent is strong. Really strong. Sometimes, even if you're The Chosen One — and definitely if you aren't — you end up in a fight that's way out of your league. You need to find some means of escape, or at least something to buy yourself some breathing room so that your foe can't just shoot you while you're trying to come up with a Plan B.

So you run away. Maybe you already have a clever escape strategy, or some cute idea that revolves around hiding among cardboard boxes in a warehouse and ambushing him when he comes to find you. Things are looking good ... until your opponent decides to stop you from getting away. Oh, Crap!

Remember, this guy is strong and possibly smart as well. He may even have Psychic Powers or magic. Or both. Or even be a god. Whatever the case, the point is this: he can't be bothered to actually run after you to catch you. No, he's so awesome that he can catch you without even moving. How, you ask? Simple! He teleports you over to where he's standing. Or grabs you with a wire and reels you in. Or extends a really, really long arm and grabs hold of you. Or...

Despite what it sounds like, not related to "Get Back Here!" Boss. Contrast Escape Battle Technique and Switch-Out Move. Compare The Determinator, Super-Persistent Predator, Anti-Escape Mechanism and Corralling Vacuum. May double as Kick Them While They Are Down or Disproportionate Retribution when the instigator is doing so in a refusal of the victim retreating or surrendering.

Sub-Trope of Status Infliction Attack, by changing the status of their location.

The trope namer is EverQuest, in which hundreds upon hundreds of high-level monsters and bosses would state the phrase "You will not evade me (player name)!" before using the teleport variant of this trope.

Alternative Title(s): You Shall Not Evade Me, Get Over Here