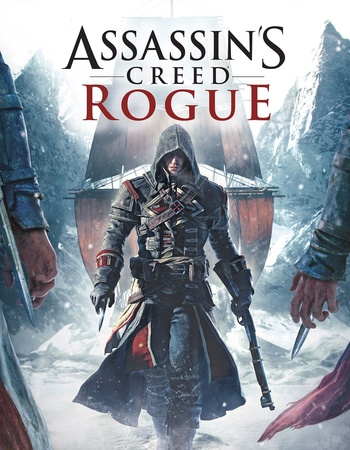 "Once an Assassin, now their pursuer. The air is still, and I am a hunter."
"History may brand me traitor, rebel or renegade. But in the end, it doesn't matter how history remembers me... what matters is that I followed my own creed."
— Shay Patrick Cormac
Advertisement:

Shay Patrick Cormac is the son of Irish immigrants to New York and a newly minted recruit of the Assassin Brotherhood under the leadership of Achilles Davenport. His new convictions have not yet set in fully when he gets sent to complete a mission that unleashes a disaster of unexpected proportions, which disillusions Shay from the Brotherhood and their heroic purpose. Burdened by his terrible knowledge and rendered a pariah to his former friends, Shay finds allies among the Templar cause and goes forth on a dark quest that takes him to the frozen ends of the earth.

Meanwhile, in the present day, an Abstergo Research Consultant going through Shay's memories accidentally activates a virus that knocks systems out in the building. Working alongside several Templars, the Consultant must slowly bring power back to the building while finding out what's so special about Shay to have such a powerful virus attached to it.

The game revisits the New England setting of Assassin's Creed III, including the city of New York, in addition to featuring the North Atlantic Coast and the Arctic Ocean, whose cold waters can be sailed on Shay's brigantine, Morrigan.

As an anti-villain, Shay has sympathetic reasons for going against his former brothers, and genuinely thinks he's doing the right thing.

As an anti-villain, Shay has sympathetic reasons for going against his former brothers, and genuinely thinks he's doing the right thing.