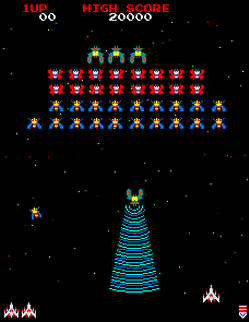 Galaga note  pronounced ga-LAG-a, per Word of God. is a fixed shooter arcade game and the sequel to Galaxian. It was released by Namco in 1981; the US version was released the same year under license to Midway (and later ported to the Nintendo Entertainment System to Bandai (now merged with Namco to form Bandai Namco Entertainment) and the Game Boy game systems (under license to Nintendo) along with Galaxian).

The objective of Galaga is to score as many points as possible by destroying insect-like enemies. The player controls a fighter spaceship that can move left and right along the bottom of the playfield. Enemies fly in groups into a formation near the top of the screen, then begin flying down toward the player, firing bombs at and attempting to collide with the fighter. Occasionally, a "boss Galaga" attempts to capture the player's fighter using a tractor beam. If successful, the fighter joins the formation and must be freed by the player (using another ship and costing him/her a life), enabling him/her to control two ships simultaneously and doubling the players' firepower. Galaga '88 even allowed the player to do the same with a third ship. The game is over when the player's last ship is destroyed or captured.

Galaga introduces a number of new features over its predecessor, Galaxian. Among these are a realistic explosion sound that occurs when the player loses a life, a count of the player's "hit/miss ratio" at the end of the game, and a bonus "Challenging Stage" that occurs every four levels, in which a series of enemies fly onto and out of the screen in set patterns without firing at the player.

Galaga is one of the few classic arcade games to still be profitable. It was released in a combination arcade game with Ms. Pac-Man and Pac-Man in 2001.

The series has also been given a downloadable title in the same vein as Pac-Man Championship Edition: Galaga Legions on Xbox Live Arcade in 2008, with a Deluxe version released as part of the Namco Generations line on Xbox Live Arcade and Play Station Network in 2011.

There was a webcomic based on it written by Ryan North, as part of ShiftyLook, but that site is now defunct.

2016 saw the series return to the arcades in the form of Galaga Assault, which upgrades the graphics to HD and can now be played for tickets.

Galaga has examples of:

That man is playing Galaga! Thought we wouldn't notice, but we did.