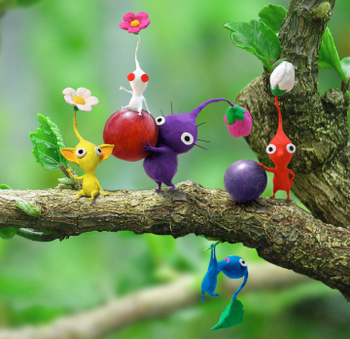 "Let's make a game based entirely around micromanagement.
Let's make a game where every moment must be spent efficiently or else it can't be completed at all; any wasted time means a growing anxiety of being able to finish. All your units must be fragile enough that a literal stray wind will severely debilitate them, and every enemy must be powerful enough to steamroll through and obliterate your entire squad in an instant if left unchecked. Let's make a game that forces you to spend several hours and superfluous effort to reach a goal that, if not reached correctly, will cease to exist.
Advertisement:
Hell, while we're at it, let's put a time limit on the whole thing.
BUT WHY DO I LOVE IT SO MUCH"
— Katie Tiedrich, Awkward Zombie, "The Breakdown Machine"

Real-Time Strategy at its quirkiest, the Pikmin series came about from a mix of the Super Mario 128 project, Shigeru Miyamoto's childhood observations of insects at work, his hobby of gardening, and general RTS gameplay. The Pikmin games lead players into a world where they must use the different kinds of plantlike creatures called "Pikmin" to defeat enemies, produce other Pikmin, collect treasures, and survive in a strange world with even stranger creatures.

The first game's basic storyline follows Captain Olimar as he crash-lands on a mysterious planet, destroying much of his ship in the process. The parts are scattered all over the region, leaving Olimar to command armies of Pikmin to get them back. The twist? He has 30 days to do it, or he dies from the dangerous oxygen in the air! Sounds fun already, doesn't it? Enough people seemed to think so, and the game became a hit in the Nintendo community.

A sequel was soon created, Pikmin 2, in which Olimar and his partner Louie went back to the planet in search of the rare treasures it held, in an attempt to bring their company back out of debt. Pikmin 2 soon became even more critically acclaimed than its predecessor, gaining rave reviews for its improved length, reliability, clever challenges, and unique style. Despite this, for whatever reason, the series hit a snag here. The series went on a hiatus with only the vaguest clues that it was still around, with Miyamoto giving rather vague hints to a third game in the series. In the meantime, fans had to contend with nine or so years of waiting before Pikmin 3 was revealed at E3 2011.

Pikmin 3 launched on July 13th, 2013 in Japan, followed by releases on July 26th in Europe, July 27th in Australia, and August 4th in North America. It was first shown at E3 2012, and introduces a system where the GamePad can be used to have a quick look-around of the map. If you play with the GamePad alone, the game controls and looks more like a Real-Time Strategy game. Interestingly enough, the player does not step into the shoes of Captain Olimar this time around, but rather three new pilots from the planet Koppai: Alph, Brittany, and Charlie. The planet is currently suffering a massive food shortage, and in a desperate attempt at salvation the three fly to the Pikmin planet (which they dub PNF-404) to collect fruit. However, an accident before landing scatters the trio and their Cosmic Drive Key, a component critical for getting back home. The three pilots, with the help of the Pikmin, must reunite, recover the drive key, and gather enough fruit to save their race from extinction while dealing with a familiar pair of explorers that also seem to have business on the planet...

A fourth installment was suddenly and surprisingly announced to be "very close to completion" on September 7th, 2015, by Shigeru Miyamoto himself, but no word was said since because it wasn't a high priority of Nintendo's

because of the Nintendo Switch coming out soon around the time.

and released in July of 2017, featuring Olimar and the Pikmin cast from 3 back in the lead roles on a 2D action platforming adventure. The story involves Olimar in his new ship, the S.S. Dolphin 2, once again crash landing, this time on a new planet that somehow also has Pikmin on it. Rather used to this by now, Olimar must use the various Pikmin colors to collect treasure in order to refuel his ship and blast off. This new title, called Hey! Pikmin, is compatible with amiibo, with its own specific Amiibo featuring the titled plant creatures releasing the same day as the game.

Another spinoff, Pikmin Bloom, is an augmented-reality location-based phone game. It was co-developed by Niantic Labs, creators of Pokémon GO, and released on October 27, 2021.

On September 13, 2022, Pikmin 4 was finally confirmed to have a release date

The official Japanese website for Pikmin 3 can be found here

, while the English version of the site can be found here

The first two games have been ported to Wii as well, with enhanced Wii Remote controls; in 2020, the third game was ported to the Nintendo Switch with all DLC included and extra side missions starring series regulars Olimar and Louie. Olimar is also a playable character in the Super Smash Bros. series beginning with Brawl, with Alph added as an alternate costume in Wii U and 3DS. The series as a whole is represented in Nintendo Land with its own subgame, Pikmin Adventure, and is also referenced a few times here and there, like in WarioWare. It even appears as animations used to represent the transferring of your data to the 3DS and Wii U!

Like many works of fiction, there is a dedicated wiki to this series, namely Pikipedia

hinted at during Pikmin 3's development have been released for the Wii U and 3DS eShop for around five US dollars, with the Wii U version being in HD, and the 3DS version being in 3D. In 2020, Nintendo uploaded these shorts on their YouTube page, where they can be watched free of charge.

Compare to Overlord, which has a similar but darker premise. Not to be confused with the trope Pig Man, or with the short story "Pickman's Model" by H. P. Lovecraft.

open/close all folders
Games in the series