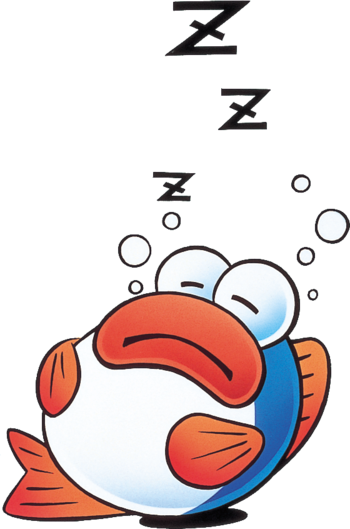 What did you expect from an enemy called Rip Van Fish?
Enemies come in all sorts of variations. Whether they're competent Elite Mooks or easily disposable Cannon Fodder like The Goomba, you would at least expect them to pull their weight when it comes to assisting the Big Bad on their conquest to Take Over the World.
Advertisement:

But then you get these guys. The lazy bunch who prefer to do nothing but sleep all day, the Big Bad's orders be damned.

Sleepy Enemies are enemies that are almost always found asleep. They're usually passive and docile in this state and will not pose a threat to the hero from the outset... unless they disturb them. The enemy's reactions to waking up can vary. Most commonly they'll Turn Red and lash out at the hero in an Unstoppable Rage, but other reactions include fleeing from the hero, alerting their comrades of an intruding threat, or just plain apathy to their situation.

Commonly found in video games because these types of enemies can allow the player to sneak up on them to get the upper edge, and there may be a dedicated Stealth-Based Mission involving them. Generally, they're weaker and easier to deal with while sleeping but stronger and more challenging while awake. Other times, however, it's more preferable to avoid them entirely while they're sleeping, especially if they're strong Beef Gates ready to tear the player apart at a moment's notice should they trespass on their turf. Typically, if the player hides from their view for a while or runs away far enough from their initial area, they return to their position and eventually fall asleep again, though in rare cases enemies will remain alert.

Sub-Trope of Sleepyhead and Don't Wake the Sleeper. Compare Lazy Dragon. Can be a form of Savage Setpiece. See also Cowardly Mooks and The Guards Must Be Crazy, which are related tropes that share the same family tree as this one. Tends to overlap with Harmless Villain most of the time, and even if they retaliate against the hero, it's usually because they don't like being woken up rather than fulfilling an ulterior motive the Big Bad set for them. Contrast Forced Sleep, which is about using spells or powers to put people (including enemies) to sleep, and Never Wake Up a Sleepwalker, where waking up a sleepwalker causes their death.