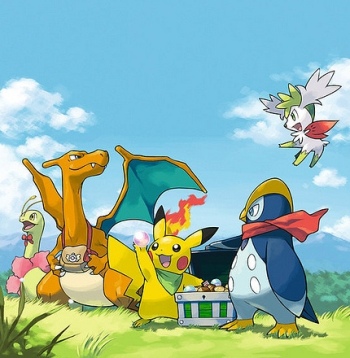 Imagine a world where only Pokémon roam.
Including YOU.
"Introducing the newest Pokémon ... YOU!"
—Tagline, Pokémon Mystery Dungeon: Red/Blue Rescue Team.
Advertisement:

A Pokémon themed entry in Spike Chunsoft's (originally Chunsoft's before the merger with Spike) Mystery Dungeon (Fushigi no Dungeon) Roguelike franchise. The games center around a world populated exclusively by Pokémon (with no humans to be seen), who live in towns and cities, run shops, and go on adventures in randomly generated dungeons.

Pokémon Mystery Dungeon as a whole is notable from the main series for two reasons, one being that it's the first entries in the entire Pokémon franchise to place special emphasis on Character Development and a compelling Story Arc (as opposed to the series's usual quest To Be a Master and to Gotta Catch Them All), typically involving humans who awaken in the Pokémon's world to discover that they've somehow been transformed into Pokémon themselves. They become best friends with another Pokémon, form an adventure team, and go on a Quest for Identity over the course of many adventures, as clues about their Mysterious Past reveal that their ultimate destiny is nothing less than saving the world from imminent destruction.

The second reason this spinoff series is notable? Because it's the first time we get to hear exactly what the Pokémon are saying underneath all the Pokémon Speak we've come to expect.

The gameplay is what you would expect from a Roguelike, except with battle mechanics loosely resembling those of the main Pokémon series: All 700-plus individual species (which you can "recruit" to become members of your team), all 18 elemental types, moves, abilities, and Status Effects from the main series show up in a manner better suited to the different nature of gameplay. The Pokémon themselves are represented faithfully with 8-directional walking and attacking sprites and dialogue portraits (an impressive feat in and of itself!).

The first two installments also received their own manga adaptations and a few anime episodes based on them; the fourth also received an anime-style two-episode short movie.