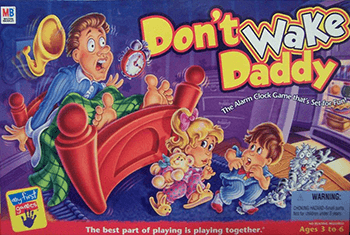 The Sleeper is asleep, and must remain so. Waking them up would be the worst idea ever, and for that reason there might even be some powerful guardians trying to keep you from disturbing their slumber.
Advertisement:

Different works have very different reasons why The Sleeper must remain asleep, but the five major types of reasons are:

If the Sleeper does wake up, a Dream Apocalypse might occur (even in the real world, if the sleeper in question is a Reality Warper). Can often overlap with a Stealth-Based Mission.