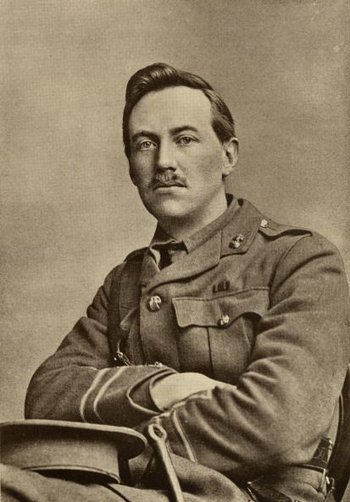 Come with me, ladies and gentlemen who are in any wise weary of London: come with me: and those that tire at all of the world we know: for we have new worlds here.
—Preface to The Book of Wonder
Advertisement:

Edward John Moreton Drax Plunkett, 18th Baron of Dunsany (24 July 1878 – 25 October 1957), was an Anglo-Irish fantasy author active in the first half of the twentieth century. He first became famous for The Gods of Pegāna, a collection of supershort stories about a set of fictional gods who created the Worlds. He later wrote a great deal of fantasy, including The King of Elfland's Daughter and many many short stories. Later in life, he wrote a variety of non-fantastic fiction, including the tales of Jorkens, a clubman who tells fantastic tales but always loses the one bit of evidence that would prove the tales were true, and Smethers, a little man with a little business and a most peculiar roommate.

Dunsany also wrote many plays, which seem to be mostly forgotten, much like his other work. His works vary greatly in tone and style, which is particularly apparent in a recent collection from Penguin that spans most of his career.

Dunsany's influence on later fantasy is usually overshadowed by J. R. R. Tolkien (who himself cited Dunsany as one of his inspirations), but he was very famous in his day. The dreamlike prose of his early work is particularly addictive and frequently imitated by those who read him. For that reason, Ursula K. Le Guin dubbed him "the First Terrible Fate That Befalleth Unwary Beginners in Fantasy".

Dunsany saw action in The Second Boer War as a first lieutenant of the Coldstream Guards and in World War I as a captain in the Royal Inniskilling Fusiliers. He was also an excellent chess player and developed Dunsany's Chess

, a variant that pits a standard set of pieces against 32 pawns.

Works by Lord Dunsany with their own trope pages include:

Other works by Lord Dunsany provide examples of: