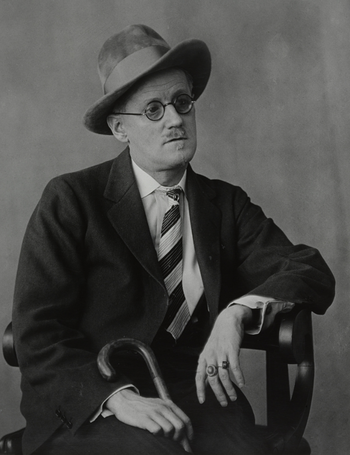 Well hello there. I wrote you a letter.
"This ought to keep the professors busy for a hundred years!"
— James Joyce, after publishing Finnegans Wake. Damn it all to hell, the bastard was right.
Advertisement:

James Augustine Aloysius Joyce (2 February 1882 – 13 January 1941) was an Irish writer, likely the most influential writer of the 20th century. If you think that's a bit hyperbolic, in 1998, Modern Library ranked Ulysses No. 1, and A Portrait of the Artist as a Young Man No. 3, on its list of the 100 best English-language novels of the 20th centurynote But then again you might not put too much stock in Modern Library and English might not be your first, second, third or fourth language. To those seeking a simple description of Joyce's work, "modernist" is most often applied, though Joyce more defined the term than followed it.

Although he lived most of his adult life away from Ireland, his work is almost entirely Irish in tone, manner and location. It was said, and Joyce is probably the pre-eminent example, that the first thing all great Irish writers did was leave Ireland. Joyce's own Author Avatar Stephen Daedalus famously says in Portrait that "Ireland is the old sow that eats her own farrow" - given how many of Joyce and his contemporaries would be censored, vilified and tried for obscenity by conservative Irish authorities, this was understandable. (Though contrary to popular legend, Ulysses was never officially censored in Ireland - thanks to abuse of a customs loophole, there was never even an attempt to sell it until the 1960s.)

Excepting a few articles, a handful of short stories and poems, and a play called Exiles that virtually no one reads, Joyce's CV is four works long, yet all of them are considered highly important works and present in many reading lists of college literature:

If our primary article on the book cannot answer your questions, maybe Finnegans Wake will?

Real world wearer of an Eyepatch of Power. He died and was buried in Zürich, Switzerland. As of January 1st 2012 his work is in the public domain worldwide—except in the US. And even there, only Finnegans Wake is still under copyright, specifically until 2035.note Actually, in the States, his other three novels had been PD for years before 2012. Copyrights on literary works created before 1978 had a term of 75 years, meaning that Dubliners entered the PD in 1990, A Portrait of the Artist as a Young Man in 1992, and Ulysses in 1998. The US extended the terms of existing copyrights by 20 years in 1998, but that law specifically refused to revive copyrights whose terms had already expired.note  During the 80s, 90s and 00s, the Joyce estate had been exercising ever stricter control over Joyce's copyright, to the extent that even people writing scholarly books were being refused permission to quote from the work if the estate didn't like anything about them - it was even reported that one academic was refused permission to quote because Joyce's literary executor (his grandson Stephen) didn't like the name of the university football team. Now that the work is in the public domain, it's expected that Joyce studies will see a revival, and many theatrical adaptations of his work have already been produced. Film, TV and new media versions will likely follow.

Works by other authors in which Joyce is a character, or in which his work is referenced: