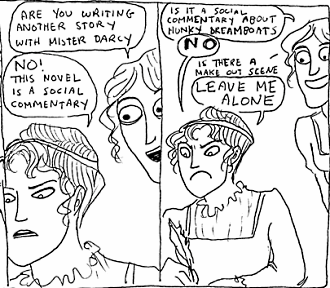 "I was told I make intelligent comics, and then I made a comic about a horse that pooped."
— Kate Beaton
Advertisement:

is a largely history-based Webcomic by Kate Beaton, best known for its historical comics, which are one-shots of varying length focusing on historical events or figures getting into pretty inaccurate situations.

Recurring themes include Beaton visiting her younger self, Canada, a pony called "Fat Pony", and a story about a sailor who meets a mermaid. Like most webcomics, there is little continuity between entries, and it rose to fame through Memetic Mutation taking hold on a few comics. Also, rather than use Alt Text, Beaton usually accompanies each comic with a short paragraph.

The webcomic went on hiatus in mid December 2016 as Beaton switched focus to a graphic novel she was working on, though she continued to post sporadic updates on her Tumblr. On the 10th of October 2018 Beaton updated the website to inform readers that due to personal issues and continuing work on other projects she had decided that Hark! had run its course and the website would now be an archive of the comic with no new comics planned. The comic can be read on its site.

Additionally, Kate Beaton has a personal tumblr which can be seen here,

and a Live Journal here.

Meanwhile, in a 20 mile radius of this event: BODICES RIPPING; MEN TURNING GAY; IT WAS AMAZING; the end