Webcomic / His Face All Red 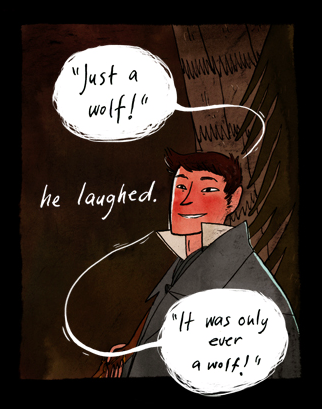 "We were separated. The beast must have devoured him. This was the only trace I found."
Advertisement:

"His Face All Red" is a short horror comic written by Emily Carroll, reminiscent of the works of Edgar Allan Poe. First published online in 2010, it's been published in print form in Carroll's collection Through the Woods.

Our main character sits at a bar, watching a man happily socialize, and thinks to himself that this man is not his brother. Even though this man has his brother's wife, his property, his charismatic demeanor, and even his face, it can't be his brother.

Because just a week ago, the main character killed his brother.

The story has been praised by Kate Beaton and Scott McCloud for its pacing and atmosphere. It can be read here

. There is a reading here

His Face All Red contains examples of: