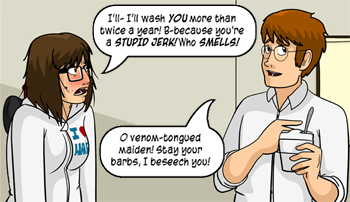 Kaiba: Your brash nature offends me, Mr. Muto! I shall soon put an end to your impertinence!
Yami: You have assembled several creatures! Surely this is a violation?
Kaiba: My affluence makes a nonsense of the regulations!
— Yu-Gi-Oh! The Abridged Series, Episode 35 (this scene, in particular, is a parody of old black and white silent films).
Advertisement:

A lot of clichés surround the English language as it was used in the 18th and 19th centuries: a tendency not to shorten or abbreviate words (except some words like "mustn't" that are ironically not typically abbreviated today); an abundance of hyphens (not only for compound words, but even for words with more clearly defined prefixes or suffixes); a fondness for now-outmoded typographical conventions such as the long s (ſ); and, of course, a love of Sesquipedalian Loquaciousness and Purple Prose.

Put any of these quirks together, and you get Antiquated Linguistics: the Theme Park Version of language from the Georgian and Victorian Eras. Works set between about 1700 and 1930 are particularly susceptible to this trope, but it's by no means limited to them; some creators dip into Antiquated Linguistics for comic effect or simply to mark a particular character's speech pattern as old-fashioned. Expect a Dastardly Whiplash type to speak in this manner. Affecting this kind of English can often serve as a Translation Convention.

Not to be confused with other, separate Theme Park Versions of old-fashioned English: Ye Olde Butcherede Englishe (generic Medieval/Renaissance lingo, a.k.a. "gadzookery"), Flowery Elizabethan English (ornate language smelling vaguely of Shakespeare and/or the King James Bible), and Talk Like a Pirate (arrrr). Compare and contrast Buffy Speak and Spock Speak. And, for those who can't get enough of Antiquated Linguistics, this page is also available in a self-demonstrating version.