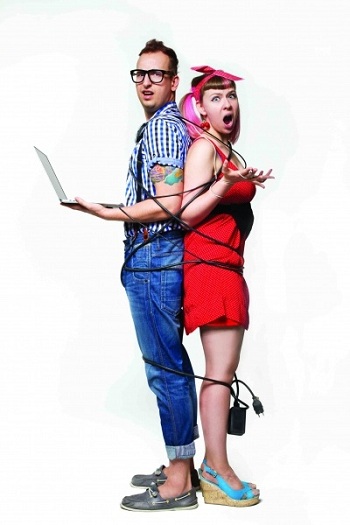 A Vlog celebrating all things South Korean created by Simon and Martina Stawski. High school teachers in Canada, the Stawskis moved to South Korea in 2008 to teach English. The vlog started as way of reassuring their parents that they were OK and has grown exponentially since.

The Stawskis create videos sharing their discoveries about Korean culture. Topics range from how to light a furnace or use the washing machine, to street food, nightlife, music, and what ever else captures their attention. They started the vlog at a time when very few in South Korea were using blogs or vlogs. They were among the first to seriously discuss Korean popular music (K-Pop) artists in a format beyond that of the gossip columns.

After forming a partnership with YouTube they later resigned from their respective schools to devote their full energies to the vlog. The Stawskis have incorporated in South Korea and have made Eat Your Kimchi (EYK) their business. In late 2012 the Stawski's turned to crowdsourcing to see if they could raise the funds to move from Bucheon to Seoul and open a studio there. The original goal of the fundraiser was met within 24 hours and they raised almost three times the amount they originally sought. The Eat Your Kimchi Nasty Studio opened in Hongdae, Seoul and the Stawski's added two new members to their crew. Office manager Soo Zee and Intern/Video Editor Leigh Cooper appear in videos on a semi-regular basis. Their friend Ryan has also made appearances in their videos.

In 2015, the Stawskis shut down their studio and moved to Japan.

In August 2020, the couple returned to Canada due to Martina wishing to take care of her mother due to the death of father and the Covid-19 Outbreak.

Sadly on 12th February 2021, the couple announced their divorce