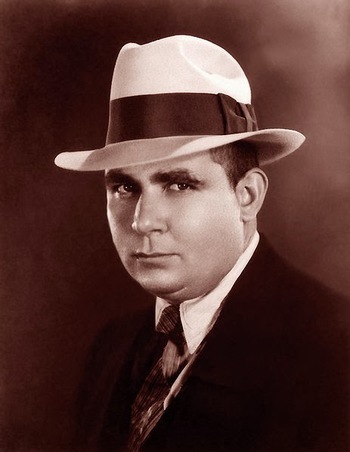 "Money and muscle, that’s what I want; to be able to do any damned thing I want and get away with it. Money won’t do that altogether, because if a man is a weakling, all the money in the world won’t enable him to soak an enemy himself; on the other hand, unless he has money he may not be able to get away with it."
Advertisement:

He wrote short stories and poems spanning several genres, including Heroic Fantasy, Western, Cosmic Horror and Historical Fiction. He was the Trope Maker for the genres Low Fantasy, Dark Fantasy and Sword and Sorcery — which, in fact, received its name from a discussion of what the genre that a Howard story was should be called. Along with J. R. R. Tolkien, he is one of the most influential writers in modern fantasy. His life was the subject of the 1996 film The Whole Wide World.

Howard was a friend and correspondent of H. P. Lovecraft and one of the contributors to the original Cthulhu Mythos. It was an Odd Friendship: The erudite New Englander and backwoods Texan boy, with diametrically opposed philosophies about. . . well, everything. While Lovecraft felt that human concerns and powers were utterly irrelevant to the universe at large (the foundational cornerstone of Cosmic Horror), Howard felt that humanity could overcome anything (especially themselves) so long as they held barbarism in their heart. (An Eldritch Abomination appears in a Lovecraft story, anyone present will die or go insane, and the person who lived to tell the story probably wasn't even there. An Eldritch Abomination appears in a Howard story, Conan will probably sword it to death.) Lovecraft liked technology and civilization, Howard most emphatically did not. But the two actually bonded over their differences, challenging each others' worldviews and forcing honest evaluation which only strengthened them.

His most well-known creation is Conan the Barbarian, a character that has greatly overshadowed his creator.

Howard committed suicide with a gun at the age of 30, after his ailing mother fell into an irrecoverable coma and he was told she would never wake again. She died shortly after.

Many of Howard's works (including some juvenalia) are available here

Artists that were influenced by Robert Howard's works include:

Robert Howard's stories (that do not have their own articles on this wiki) include examples of: