Literature / The Pool of the Black One 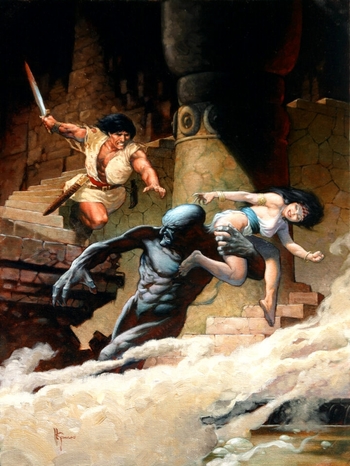 "The Pool of the Black One

" is a Conan the Barbarian story by Robert E. Howard. First published in October, 1933.

Conan joins a group of pirates after swimming over to their boat in shark infested waters. The crew take a liking to him, as does the captains concubine, Sancha. The captain however doesn't trust Conan, and with good reason, as Conan seeks to usurp his position.

The captain sails their ship far out to sea, and lands them on an uncharted island, hoping to find untold of riches. As the crew nap on the shore, Conan challenges the captain to a duel, which Conan wins. As he basks in his victory, he notices one of his crew members being carried off by mysterious black figures.

After witnessing them perform a horrifying ritual involving a mysterious pool, Conan starts to rush back to his new crew, only to realize that they have already been captured by the Black Ones. Conan returns to the Black Ones lair to rescue his crew and Sancha, and hopefully escape with their lives.

It has been adapted by Marvel Comics in their Savage Sword of Conan magazine.