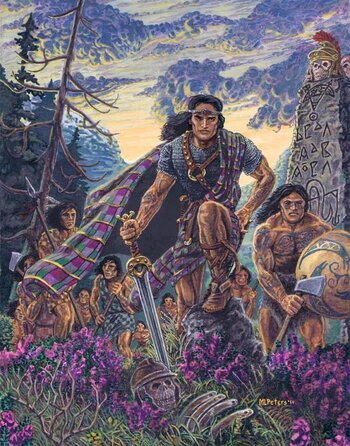 Bran Mak Morn is a series of pseudo-historical Heroic Fantasy short stories by Robert E. Howard. One of Howard's lesser know series, it is made up of a collection of both short stories and poems, few of which were ever published in Howard's lifetime. Named for the main character, who is a king of Howard's idealized Picts, a race which lived on the British isles at the time of the Roman invasion.

Some of Howard's notes date Bran to around 100 AD. Others say around 300 ADnote Hadrian's Wall did not exist as of 100 AD

The Bran Mak Morn stories are a peripheral part of the Cthulhu Mythos. Notably, Worms of the Earth mentions R'lyeh, and a draft of that story mentions Cthulhu.