Literature / Beyond the Black River 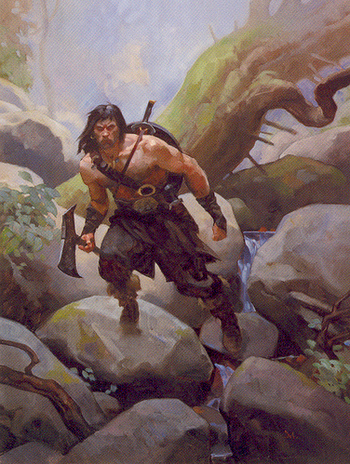 "Barbarism is the natural state of mankind," the borderer said, still staring somberly at the Cimmerian. "Civilization is unnatural. It is a whim of circumstance. And barbarism must always ultimately triumph."
Advertisement:

"Beyond the Black River

Balthus is an young man, recently sent to help defend the border lands of western Aquilonia; lands which encroach upon the territory of the savage Picts. He meets and befriends Conan, a Cimmerian, who has been serving at the nearby fort as a tracker and soldier for several months. There have been a recent rash of murders, perpetrated by demonic minions of Zothar Sag, a Pictish chieftain.

Conan suggests breaking the shaky peace with the Picts in order to put a permanent end to the problem. He assembles a small team, including Balthus, who along with himself, will sneak into Zothar Sag's camp and kill him. However, this will require them to cross the Black River and into Pictish territory, a savage land for a savage people, populated by all manner of beasts, and some things out of their nightmares.

Often considered one of Robert E. Howard's greatest works, it features many of the recurring themes present in his other works, such as the man's innate barbarism and the impermanence of civilization, yet given far more focus here.