Literature / Iron Shadows in the Moon 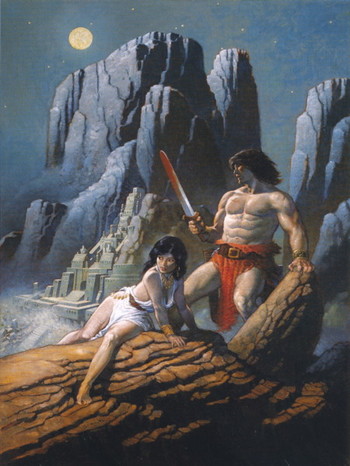 Olivia dreamed, and through her dreams crawled a suggestion of lurking evil, like a black serpent writhing through flower gardens. Her dreams were fragmentary and colorful, exotic shards of a broken, unknown pattern, until they crystalized into a scene of horror and madness, etched against a background of cyclopean stones and pillars.
Advertisement:

"Iron Shadows in the Moon"

(a.k.a. "Shadows in the Moonlight") is a Conan the Barbarian story by Robert E. Howard. First published in April, 1934.

The story begins with Olivia, a beautiful slave girl, being chased down by her cruel master, Shah Amurath, who traps her at the edge of the water, where she can not even drown, but Conan appears, the only survivor of a band of kozaks massacred by the Shah's men and intent upon revenge, who savagely kills him. At Olivia's plea, Conan takes her in a boat, and they escape to an isle, where they find a parrot screeching mysterious words and a hall of mysterious statues, depicting men who are black but not Negroes. When they sleep there, Olivia dreams of these men torturing a demigod, who finally summons his father and is murdered before the god arrives. The god appears and turns to them to stone, and — from his gestures at the moon — declares they shall wake only under moonlight. Olivia wakes, panicked, and convinces Conan to leave.

They find pirates arriving, and Conan kills the captain, an old enemy, making himself their captain by the laws of the Red Brotherhood. They capture him and dispute the matter in the hall. Olivia sneaks in and rescues Conan, who then has to kill a prowling ape-man who had earlier thrown boulders at them. They hear a slaughter behind them, and the survivors of the band return to the ship to beg Conan to take them on. Conan sets sail, promising Olivia that she will be the 'Queen of the Blue Sea'.

Alternative Title(s): Shadows In The Moonlight