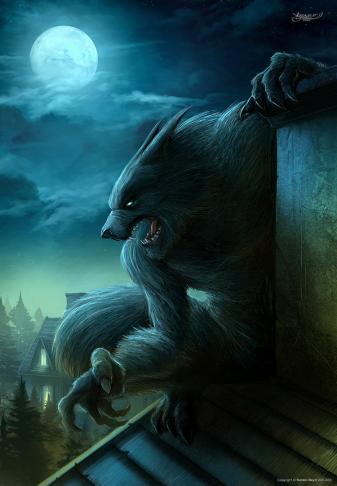 Guess it's that time of the month again!
Image

.
"Do you feel it, the moon's power?"
— Saïx, before unleashing his true nature, Kingdom Hearts II
Advertisement:

The Moon does things to people. Makes women crazy, drives the lunatics wild, or maybe is the external power source for some supernatural powers. The full Moon might bring out the monster in someone, or a new Moon may bring the human out of a monster. It may be tied to illusions, metamorphoses and inconstancy, mirroring the Moon's constantly cycling phases. In general, the Moon is often a catalyst in magical things.

More mundane things are stealth on the night of a new Moon, or illumination on the night of a full Moon. A full Moon is associated with lycanthropy as the most common way to trigger the transformation (a trope that is somewhat Newer Than They Think), and lunar symbology is often strongly associated with werewolves even beyond the transformation. The duality of the Sun and Moon is also seen as mirroring the duality of men and women. From that, the Moon is usually a feminine symbol (this may be because both have monthly cycles).

The words "lunacy," "lunatic," and "loony" are derived from "Luna" because of the folk belief in the Moon as a cause of periodic insanity. When planning stealthy invasions, some characters will wait for the night of a new Moon when the sky is the darkest.

See Bad Moon Rising for situations where the Moon itself is changed. See also Melancholy Moon for when used as a sad backdrop. The Power of the Sun is often used as a Foil to moon-based power. See also God of the Moon.

Each member of Organization XIII wields power over a specific element (be it classical or esoteric). Siax wields the power of the moon.

Alternative Title(s): The Power Of The Moon

Each member of Organization XIII wields power over a specific element (be it classical or esoteric). Siax wields the power of the moon.