Literature / The Nix in the Mill-Pond 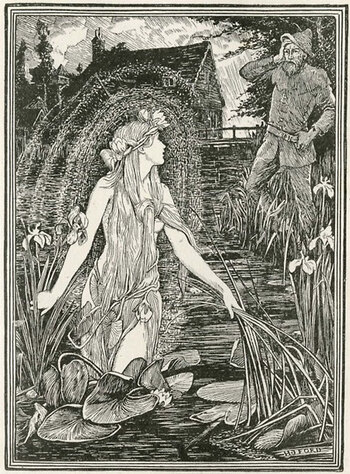 The miller meets the nixie, by H. J. Ford
Advertisement:

The Nix in the Mill-Pond (or The Nixie of the Mill-Pond) (German: Die Nixe im Teich) is a German Fairy Tale collected by The Brothers Grimm in Grimms' Fairy Tales (originally known as the Children's and Household Tales. Or, in German, Kinder- und Hausmärchen). Andrew Lang collected another variant, called The Nixy, in The Yellow Fairy Book. It is classified as Aarne-Thompson Type 316, "The Nix of the Mill-Pond".

Once Upon a Time, a once-prosperous husband and wife fell on hard times. Concerned about how he is going to provide for his wife, the husband goes for a walk in the woods, where he chances upon a nix (or a nixie, depending on how the translator interprets the Grimms' word). The mysterious and beautiful water spirit asks him about his troubles, and she offers him a bargain: she will make him and his wife wealthy again, and as payment she will take "that which has just been born in your house". Figuring she means some stray animal, he agrees, only to return home to learn that his wife has unexpectedly given birth to a baby boy.

The nix keeps her end of the bargain and the young family's riches are restored, but the mother and father take special care to keep their son away from the nixie's pond. Years go by and the boy grows to be a dashing hunter, happily married to a beautiful wife, the nixie never collecting her payment.

Then one fateful day while hunting, the hunter gets some deer's blood on his hands not far from the nix's pond. He means only to splash himself to wash his hands, but the moment his skin comes in contact with the water, the nixie emerges and pulls him under, laughing maniacally all the way down.

When her husband does not come home, his wife realizes that her husband must have finally succumbed to the nix. For days, she sits by the pond and sobs. Finally her strength gives out and she begins to dream of a wise old woman in a mountain cottage. When she wakes, she figures this must be an omen and seeks out the woman, who advises her on how to reunite with her beloved.

Following the old woman's instructions to the letter, the heroine sits by the pond at the next full moon. She runs a golden comb through her black hair, then sets it on the bank when she is done. It works, but only temporarily: her husband's head surfaces from the water just long enough for her to see his anguished face before submerging again.

The wife returns to her mentor's cottage and leaves with a second magical item, a golden flute. Under the full moon, the woman plays a beautiful tune, then sets it on the sand when the song is done. Just as last time, the wave rushes up, carries the magical item away, and her husband briefly reemerges. This time, she can see his upper body along with his head, but another wave quickly pulls him back under.

On the third trip to the cottage, the old woman gives the young woman a golden spinning wheel. The following full moon, she diligently spins the flax into thread. A massive wave takes the spinning wheel, and her husband finally reemerges entirely. Hand in hand, the couple make their way home.

However, the nix is not ready to give up and sends a giant wave to sweep them away. The woman cries out for her mentor, and she and her husband are magically changed into a toad and frog, respectively, to survive the flood. After the flood subsides, husband and wife wash ashore, human but separated once again. Lost in strange lands, they earn their livings as shepherds.

Years pass. One day both of them have to chase down some stray sheep, and coincidentally find each other again. They do not recognize the other, but quickly strike up a friendship and move in together. Then one night, under the full moon, the shepherd offers his companion some entertainment with his flute. Upon hearing the tune, the shepherdess breaks down in tears. When he asks her why, she says that she recognizes that song from another full moon long ago, the second-to-last time she saw her husband.

Finally recognizing each other, the couple reunites, and live Happily Ever After.

Translations of the story can be read in Grimms' Fairy Tales

, and in the SurLaLune site

A Hungarian variant was adapted into an episode of the Hungarian television series Magyar népmesék ("Hungarian Folk Tales"). It was titled "A víz tündére" ("The Water Fairy").

The 2018 "The Siren" opera created by British composer Sandy Clark is based on the tale.

"The Nix in the Mill Pond" includes examples of: