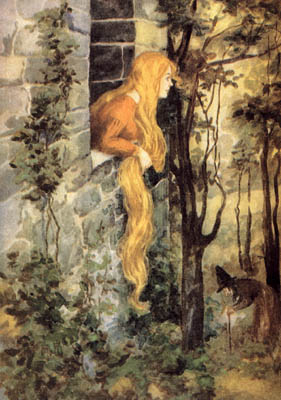 Rapunzel (with, as she is often depicted, golden hair)
Rapunzel, Rapunzel, let down your hair!
Advertisement:

Once upon a time, a couple lived next door to a witch with a beautiful garden. The wife developed such a craving for the rapunzel (specified as rampion in some versions) in this garden that the husband snuck into the garden and stole some for her. The longing increased, and the husband tried to steal more, only to be caught by the witch, who demanded their unborn child as a consequence.

Sure as her word, the witch took the couple's daughter and called her Rapunzel. When she was twelve, the witch shut Rapunzel into a tall tower without doors. Whenever she wanted to enter, the witch would call, "Rapunzel, Rapunzel, let down your hair", and Rapunzel would lower her extremely long hair for the witch to climb.

One day, a prince overheard Rapunzel singing, and, having taken an interest in her situation, soon saw how the witch came and went. He repeated the witch's trick, Rapunzel dutifully let her hair down, and the two made plans to elope. One day, however, Rapunzel accidentally revealed the Prince's existence to the witch, who cut off the girl's hair and banished her to the desert. The witch then lay in wait for the Prince, and pushed him off the tower into a bed of thorns, which blinded him.

The unlucky couple wandered the wasteland for some time (during which Rapunzel bore either a single child or twins, according to some versions) before running into one another. Rapunzel immediately embraced him, weeping, and her tears fell on his eyes and healed them. He took her back to his kingdom, and they lived Happily Ever After.

The best known version of this story comes from The Brothers Grimm, probably based on Giambattista Basile's "Petrosinella/Parsley". Initially, Rapunzel betrayed the Prince's existence by remarking on how tight her dress was getting around the middle, but the Grimms decided that this was too raunchy and so in later versions, she instead remarked that the witch was much heavier to pull up than her Prince.

The story may be based on the legend of Rudaba as found in the The Shahnameh, as well as the tale of St. Barbara. Many of the older forms — such as "Snow-White-Fire-Red" — appear more closely related to a tale type called "The Girl Helps The Hero Flee" — such as "The White Dove". Another variant is "Prunella". Some researchers also consider this to be a remnant of some pre-Christian European sun goddess myth - compare for instance the stories of Saule's imprisonment in Baltic Mythology.

The Grimms' version can be found here

. Andrew Lang's version of the tale can be read here

In 1988, Grimm's Fairy Tale Classics dedicated a whole episode to this tale.

A Disney Animated Canon version of this fairy tale was released in 2010 under the title Tangled, as a result of Executive Meddling figuring a non-gender specific title would bring more people in.