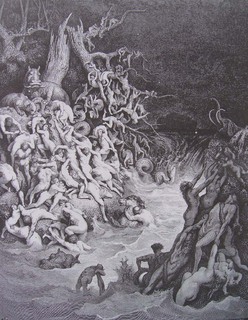 What happens when God (or the gods) decides to Kill It with Water. All of it.

Older than the book itself, this is the one element nearly ubiquitous in mythology, and with good reason: it may have had a basis in reality note (a hypothesized late Pleistocene/Early Holocene flooding event, possibly from a small asteroid impact or earthquake off the coast of Madagascar causing a tsunami, or maybe the melting and receding of the ice caps and glaciers of the last Ice Age.), but as a kind of cultural memory it forms the backbone of many origin mythologies, from the Australian Aboriginal Dreamtime to the biblical Book of Genesis. Usually the moral of the story is "don't piss off the gods", but sometimes the flooding is part of the process of (re)creating a world, often as a literal way of washing away the corruption of the previous one before a new one can be born.

Some scientists argue that the prevalence of the Great Flood in Eastern Mediterranean myth derives from a historical event, in which the Black Sea

in about 5600 BCE. However this would only account for the Middle Eastern and possibly the European myths, not the ones from the rest of the world. Some of various religious persuasions believe that the prevalence of the Great Flood myth derives from an actual worldwide great flood caused by their deity of choice (although a global flood isn't seen as plausible by most scientists

.note  Others think that the Great Flood happened so long ago, during the Middle or early late Paleolith, that when modern humanity spread around the world they still retained the memory. This could account for the bottleneck seen in human beings, especially the modern subspecies, though problems in the fossil record would make this an unlikely position. The first and propably most important issue is that, even if the polar caps melted, there's much less water in the surface and the atmosphere than the needed to submerge Earth's surface to the levels mentioned on the Bible. If one resorts to the subsurface one

, new issues pop up. Obviously, however, the miraculous creation — and later removal — of enough water to flood the world wouldn't be outside the power of most religions' understanding of God/the gods).

This may sometimes be tied to a Green Aesop, chiefly when the flooding is caused by runaway global warming causing the global ice sheets to melt.

The waters will usually recede after a while, at which point some focus will be given to the survivors recovering and rebuilding, but sometimes they will stay, and the affected world will be permanently turned into a Flooded Future World.

Expect a Giant Wall of Watery Doom or a Noah's Story Arc.