Our Archons Are Different 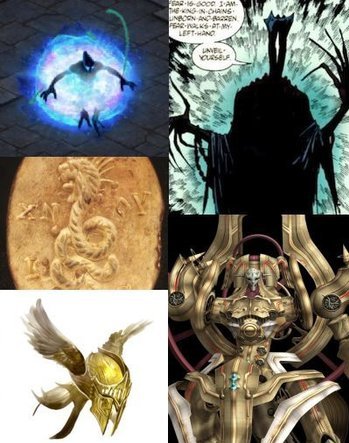 Know your archons.note Clockwise from top left: a Protoss archon unit from Starcraft; the King of Chains from The Invisibles; Yaldabaoth, a Faced Mechon from Xenoblade Chronicles; a lantern archon from Pathfinder; an ancient coin depicting the Demiurge
Advertisement:

Gnosticism has influenced western media for hundreds of years, and as such its cosmology has occasionally served as the inspiration of fantasy or sci-fi settings. As such, the main mythological agents of gnostic mythology, the otherworldly, oppressive beings collectively referred to as archons, often make an appearance in numerous works.

Derived from the Greek Archon ("ruler" or "lord"), "archon" has been adopted by Gnostic religion to refer to the supernatural ruling powers of the world. Considered either demonic or angelic (largely because of the Demiurge), archons are syncretised with both, and not without reason, being hostilenote being associated with order and oppression, they're Always Lawful Evil (or else ignorant) powers associated with order and bureaucracy. Described as animalistic monstrosities that control the physical world, they're strongly associated with planetary bodies and stars, twisting the then common Greek pagan belief that Stars Are Souls, as they devour human souls after we die. Nonetheless, in spite of this Lovecraftian setup, they're often considered weaker than enlightened humans, and following the gnostic instruction manual will guarantee your escape from their clutches. note Maybe. Some sects were awfully pessimistic about your capability to escape.

Being associated with oppression and bureaucracy, many works have adopted archons as agents of The Conspiracy or evil world orders, keeping the masses as complacent cattle and turning on the protagonists once they discover the truth. In most cases, their Lovecraftian attributes are replaced by more mundane sci-fi gimmicks like being aliens (favourably reptilian ones). Other times their association with order and angelic traits are enhanced upon, and they become extremists trying to impose order on the world. Regardless of their portrayal, it's exceptionally rare to see "classical" archons in media, but as long as themes of Order Versus Chaos remain, so will archons, In Name Only or not.

Worth noting that despite the coolness of the name to English speakers, in Byzantium and latter-day Greece archon, while still literally meaning ruler or lord, is often treated as leader or administrator (of a club or department), or the equivalent of a provincial governor in the Byzantine Empire. It was also the title of many leaders in Greek city-states, Athens being one (some were elected, others not). The name is also used in Orthodox Christianity as an honorary title for lay members who have performed some significant service to the church, not unlike being knighted.