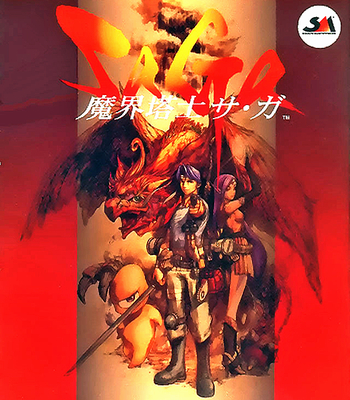 An adventurer is about to shoot you.
Advertisement:

The Final Fantasy Legend (Makai Toshi SaGa) is the first game in the SaGa series, released in 1989 for the Game Boy. It received a remake on the WonderSwan Color in 2001 and was also re-released on the Nintendo Switch as part of the Compilation Rerelease Collection of SaGa: Final Fantasy Legend in 2020.

The tower at the center of the world is said to be connected to paradise. Long ago it was sealed off due to the hordes of monsters ushering from it. Dreaming of a life in paradise, many have challenged the secrets of the tower, but no one knows what became of them. A party of adventurers formed from humans, ESP-using mutants, and monsters now challenges The Tower. Their journey will take them through four worlds and pit them against Ashura and his four fiends.

While the Western release is named in reference to the deity-sawingly popular Final Fantasy name, it only does so for marketing purposes and is only very loosely connected to the Final Fantasy franchise (some recurring art elements and monsters, for example).