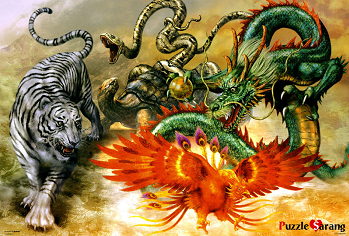 From the concept's earlier stages, a few variations have emerged. Before there were four and before they were associated with the sky, there were three: the long, the fenghuang, and the qilin/kirin. The fenghuang and the kirin got replaced by the bird and the tiger respectively. Because of the similarity between the fenghuang and the bird, the latter is sometimes depicted as the former. Meanwhile, the kirin is still regularly used instead of the tiger in religion and fiction, but also sometimes replaces the yellow dragon in fiction to bring together five distinct beasts.

A little-known fact is that the color of the animals also plays an important part in distinguishing the cardinal directions. You see, many cultures have associated certain colors with directions, and the ancient Chinese were no exception. As can be inferred, the Chinese associated black with north, blue with east, red with south, and white with west. This association is incredibly ancient and predated the rise of the Chinese as a people, with similar (though not quite the same) arrangements being seen in places as far away as The Middle East.note This is the reason why the Black Sea and the Red Sea are named the way they are. They are not literally black or red-colored, but rather because, from the perspective of the Middle East, the Black Sea is located to the north, while the Red Sea is located to the south. Also, some local languages call the Mediterranean (which is of course located to the west of the Middle East) "White Sea" or something similar, e.g. Turkish Akdeniz, Arabic Al-Bahr Al-Abyad Al-Mutawassit (The Middle White Sea).

Over the course of the years, a number of anime, manga, and video games have drawn upon the imagery of the Four Gods. Some works may forgo the four Chinese elements in favor of the standard Four-Element Ensemble. In other cases, it is used as a stock name for a Quirky Mini Boss Squad in an evil organization; see Elite Four.