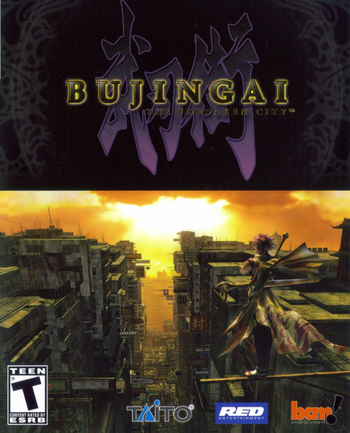 In the distant future, demons have taken over the earth, and only a few people possessing great powers and martial arts skills were able to survive. The young sword-master Lao comes back from his long exile/training in order to stop Rei, his former friend, and end the demonic influence in the world.
Advertisement:

Bujingai (subtitled Swordmaster in Europe and The Forsaken City in the U.S.) is a 2003 Hack and Slash game for the PlayStation 2 by Taito and Red Entertainment, based on Wuxia and set mostly in a post-apocalyptic world occupied by demons. Its main character, Lao, is based on, is voiced by and uses motion capture of GACKT, who also helped write the storyline.

An interesting side note: This is one of the games that ZUN worked on during his nebulous 'day job' as a programmer.