Our Manticores Are Spinier 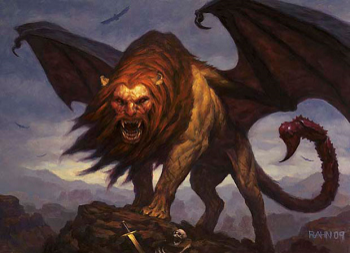 The Manticore (from Persian Martyaxwar, "Man-Eater") is a legendary creature from Ancient Persian folklore, said to stalk the jungles of India. Its favourite prey was humans, which it would devour without leaving any remains behind. These tales were recorded by Ancient Greek naturalists and were among the many creatures featured in the bestiaries, where they represented tyranny and envy. From there, it found its way into popular culture.

What nearly all manticores have in common is a leonine body (traditionally with red fur) ending in the tail of a scorpion or, more rarely, a dragon. However, usually, it will also possess at least some of the following attributes:

For another mythological monster with a human head, a lion body and sometimes wings, but very different connotations, see Our Sphinxes Are Different.

Subtrope of Our Monsters Are Different and Mix-and-Match Critters. See also Nue.

The Manticore is a humanoid beast of legend.

Alternative Title(s): Our Manticores Are Different

The Manticore is a humanoid beast of legend.