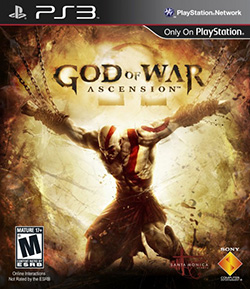 "Before he was a god, he was a man."
— Tagline
Advertisement:

God of War: Ascension is the seventh (chronologically first) installment in the God of War series, released for the PlayStation 3 in 2013.

Set six months after Ares tricked Kratos into killing his family, Kratos has renounced his service to the God of War... but is now pursued by the Furies, guardians of honor and enforcers of punishment. Kratos discovers that only by slaying the Furies will he ever be completely free of his bond to Ares.

Notable for being the first GOW game to have a fully online multiplayer mode.