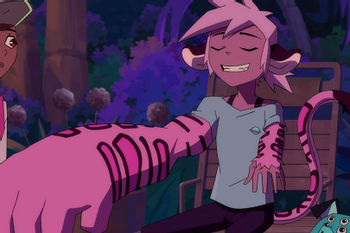 Leopards may not be able to change their spots, but were-jaguars? No problem!
One of the understated traits of shapeshifters is their versatility, not just in having multiple forms they can assume, or people they can impersonate, but by using the stages in between. When a shapeshifter uses a Partial Transformation they can selectively shapeshift a part of their body (often an arm or limb) into their alternate form. This has a lot of potential uses: For example, a shapeshifter needing to open a safe underwater doesn't have to transform into a full fish or shark, but can instead choose just the gills (and perhaps a few fins) to breathe and maneuver underwater, while retaining their human hands to manipulate the safe itself; a vampire thrown off a building could swap out his arms for a pair of bat wings to slow his fall; and a sniper without any surveillance gear could transform his eyes into that of an owl's, cat's, or anything else with enhanced vision.
Advertisement:

This can also be used for offense and defense, using their alternate form's natural weapons (claws or whatever) as a type of Shapeshifter Weapon while remaining in human form.

A second variant of partial transformation occurs when the character "stops" their usual Transformation Sequence "half way" between their forms. For example, a character who can transform between a human and a wolf shape (and we don't necessarily mean a werewolf) may opt to transform into a Wolf Man instead of a "full wolf", combining the advantages of both, like the sharp claws and fangs of their wolf shape while retaining the bipedal mobility of their human form. It goes without saying that these "middle" forms typically look like humanoid animals.

One interesting thing about the Partial Transformation is it's usually a "high-level" technique that can be mastered only by the best shapeshifters. A character who has recently acquired Voluntary Shapeshifting must first learn how to shapeshift between their "basic" forms before they have any hope of mixing and matching the elements between them in a helpful manner. Attempting to selectively invoke this without sufficient experience to properly control the transformation can result in some... messy consequences.

Phlebotinum Breakdown can also trigger this accidentally, and put the character in great danger; not only by revealing their powers to unaware Muggles, but because the broken transformation can also leave the character "stuck" between forms, possibly in a lot of pain at the same time.

Also be warned that attempting to utilize several partial transformations simultaneously may result in a Shape Shifter Mashup, a special case of the shapeshifting Gone Horribly Wrong.

Being a NOT student, Raid can't transform completely.

Being a NOT student, Raid can't transform completely.