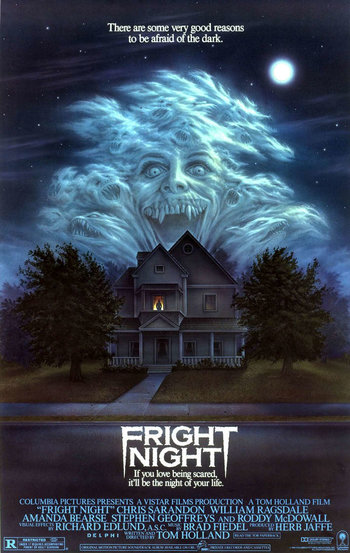 "You're so cool, Brewster!"
"Welcome to Fright Night... for real!"
Advertisement:

Fright Night is a 1985 vampire movie written and directed by Tom Holland (no, not that Tom Holland) and starring Chris Sarandon, William Ragsdale, Amanda Bearse, and Roddy McDowall.

Charley Brewster (Ragsdale) is a teenage boy who loves watching horror movies on late-night television while making out with his girlfriend Amy (Bearse), whom he pretends is helping him study. One night, he sees two men, Jerry Dandrige (Sarandon) and Billy Cole (Jonathan Stark), carrying a coffin into the house next door and makes the natural (to him) assumption that a vampire has moved in. Soon thereafter, dead prostitutes start being reported, and Charley actually sees Jerry attack a woman while looking out his bedroom window. When Jerry attacks him late one night to scare him away from investigating further, Charley's suspicions are only confirmed.

Charley seeks help from Amy and his friend "Evil" Ed Thompson (Stephen Geoffreys), both of whom think he's crazy, and then from Peter Vincent (McDowall), a former B-Movie actor turned host of the late-night horror program Fright Night. After some goading, the four of them arrange to meet Jerry to test whether he's a vampire... though, secretly, everyone except Charley is actually trying to "prove" to him that Jerry's not a vampire. However, when Peter notices Jerry's lack of a reflection, he quickly realizes that the boy is right. He and Charley decide to meet up to stake the vampire before he kills him and his friends.

The film was followed by a sequel in 1989, aptly titled Fright Night Part II. Ragsdale and McDowall reprise their roles as Charley and Peter respectively, with Julie Carmen and Traci Lind joining the cast. Set a few years after the first film, the second movie follows Charley, now attending college, and Peter as they battle the seductive vampire Regine (Carmen), who's out for revenge on both Charley and Peter for their role in Jerry's death, and decides the best way to make Charley pay is to turn him into a vampire. Now it falls to Peter and Charley's new girlfriend Alex (Lind) to save Charley from A Fate Worse Than Death.

Now Comics published 22 issues based on the movie. The first two issues are based on the 1985 movie, while the rest contain original story arcs.

A remake was released in 2011, followed by its own sequel two years later.

The 1989 sequel contains the following tropes: