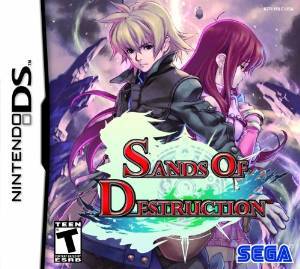 He doesn't want to destroy the world. She does.
"Destroying the world solves everything."
Advertisement:

Sands of Destruction is a Nintendo DS game developed by Imageepoch and published by Sega. It was released in Japan in 2008 as World Destruction: Michibi Kareshi Ishi, with a North American release in January 12th, 2010. It was also adapted into an anime, Sands of Destruction, which aired in 2008 and similarly had a North American release in early 2010. A manga was released in 2009, and there was an online Audio Play which ran around the same time as the anime. These were only released in Japan; however, there is an English Scanlation of the manga available.

The setting is a fictional world, where animals and human-animal hybrids reign supreme, and humans are considered second-class citizens.

Meet the World Annihilation Front (World Destruction Committee in Japan and in Funimation's subtitled version), who consider this world so corrupt that the only way to save it is to destroy it. A human member of the Front is the main 'heroine', Morte Asherah, who has a nasty attitude, a massive sword and a goal of (what else) to destroy the world with the powers of something known as the "Destruct". Along the way, she picks up Kyrie Illunis, a mild-mannered human with the power to destroy the world, but no desire to do so, and Taupy Toplan, a small bear creature on the scale of a teddy. (Just don't call him a stuffed animal). Kyrie and Taupy, unlike Morte, have no desire to destroy the world, but they are guilty by association and hunted as part of the collective "World Annihilation Front." Latecomers include a dragonkin who can see the future and a guy in an awesome green longcoat who grew up with Morte.

The World Salvation Committee consists of one highly intellectual (but not necessarily intelligent) wolfman with an intense sense of honor, his fellow wolfman rival who looks down on him for being a half-breed, an eagle-man with an ego, and several hundred Faceless Goons.

This series has a Character Sheet right here. Read at your own risk for spoilers for those who haven't watched the anime, read the manga, or played the game. For a game with a similar premise but higher on the Surreal Horror, see OFF.

Sands of Destruction provides examples of the following tropes: