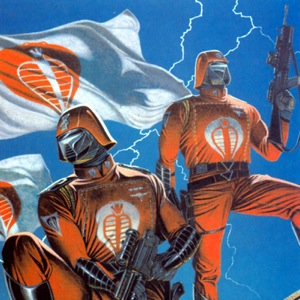 Bright colors + large sigil = Shoot me!
The uniforms of the Imperial Guard are camouflaged in order to protect their wearers by hiding them from sight. The principle is that what the enemy cannot see he cannot kill. This is not the way of the Adeptus Astartes. A Space Marine’s armour is bright with heraldry that proclaims his devotion to his Chapter and the beloved Emperor of Mankind. Our principle is that what the enemy can see, he will soon learn to fear...
— Warhammer 40,000
Advertisement:

In Real Life, soldiers on duty will usually wear fatigues. These combat uniforms are designed for many practical needs, including a lack of highly-visible markings or bright colors to help the soldier blend into the environment better. This results in fatigues crafted in either a neutral monochrome or a camouflage pattern, with the flashy dress uniforms reserved for ceremonial purposes. Officers wear the same outfits as enlisted men (except for the rank insignia) so that they can't be singled out by the enemy.

In fictional works (especially visual ones), this line of thinking gets thrown out the window, causing the Redshirt Army and the Evil Minions to charge into battle wearing uniforms that turn them into walking targets. Leaders and Officers are even worse, often charging into battle with elaborately gaudy outfits to emphasize their leaderness. Despite such recklessness, the wearer never suffers any negative repercussions for doing so (or at least no more than those offered by some other tropes).

Still, the setting may justify doing away with visual camouflage, especially in cases the enemy doesn't depend on human spectrum vision to target the opponents, be it using infrared, echolocation or some kind of Aura Vision (or just different visual recognition patterns, because most camouflages are adapted to deceive the human perception). Another justification is (ab)use of civilian equipment like a Hazmat Suit or a cargo manipulation exoskeleton in combat.

This trope typically manifests in the following ways:

Of course, it's entirely possible to combine both instances into one huge Uniform of Impracticality, as seen in the trope illustration.

In historical works taking place before the time around World War I, this is Truth in Television, as a lot of armies really did wear ridiculous uniforms back then; uniforms with adaptive coloring didn't become widespread until the twentieth century. France in particular didn't adopt some sort of camouflage for regular soldiers until 1914. Indeed, using bright colors to aid identification of allies during combat made a lot of sense at the time, given that muskets tended to be extremely inaccurate at distances over 100 yards and a lot of the combat infantry fire was conducted at even closer range. Meanwhile the commanding officers had to know where their units were, which was the reason why even units with less conspicuous uniforms (e. g. Russians dressed in dark green, Prussians dressed in dark blue, Swedes dressed in dark blue or grey, Portuguese dressed in brown) carried large and highly conspicuous colours, standards or guidons. Even when breechloading rifles were introduced in European armies, colored uniforms still served a purpose in identification amidst the gunpowder smoke until smokeless powder was adopted.

Compare Highly Visible Ninja, Chest Insignia (the superhero version of the Bullseye Badge), Conspicuous Trenchcoat (the spy and detective version), Bling of War (uniforms that are flashy), Dress-Coded for Your Convenience, and Fashion-Victim Villain.

Note: Examples of individuals with highly conspicuous uniforms (such as Captain America or Batman) might belong under Chest Insignia instead.