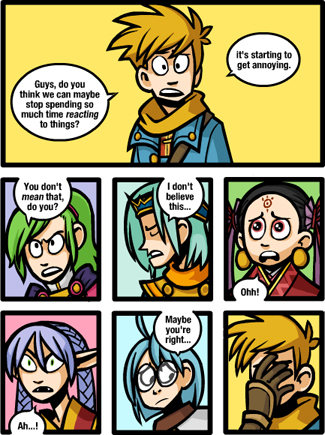 Whenever a new character joined my party, I ended up dreading the extra thirty seconds of "I SEE" that were going to be added to every conversation.
Advertisement:

Reaction Shots are... well, they're pretty self-explanatory. They tend to happen in two distinct ways:

1. When a character says or does something and the camera cuts away to another character to show them react in some way. Used in every sort of show around. In interviews, the reaction shot will simply show the interviewer nodding wisely (so that the audio could be edited — Charlie Brooker did a take on this). In a Sitcom, the other character is often doing an Eye Take.

See also: Double Take, Eye Take, Loud Gulp, Shrug Take, Spit Take, Split-Screen Reaction, A Glass in the Hand. An extreme form of this, usually reserved for Sequential Art with all but the most physical of comedians, is the Face Fault. If a video is made with this trope at its centre, that is Reaction Video.

2. When a character (or characters) are shown reacting to something "off camera". Either precedes or precludes a Reveal Shot. In the latter case, it becomes a Take Our Word for It. Can be used for laughs as the characters describe what they're seeing. One of the more clever forms of censorship (if you can't show something unspeakable, show people reacting to it and let the audience picture it for themselves!) Head-Tiltingly Kinky is an example. The effect can give the offscreen event more impact than a direct depiction. Not to be confused with a Distant Reaction Shot, which is of seeing the results of actions from another location.