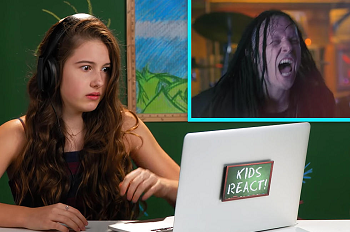 It's kind of like Let's Play, but for videos. The host (usually called a "reactor") watches a video that they've never seen before, and we get to witness their first reactions to it. Some reactors also like doing predictions before they watch the video, or a quick analysis afterwards, but the main part is the reaction itself.

There are several channels on YouTube dedicated mostly to reaction videos (called "reaction channels"). They gather small, but dedicated fandoms, who enjoy watching their favorite reactor's reaction to different videos. Some of these reactors craft a specific persona they play on-camera, to make their reactions more interesting to watch. Their video choice usually involves a movie trailer, music video, viral video, rap battle, or Vine compilation.

It has gained traction as a method of avoiding the website's infamous copyright strikes, allowing many of the original removed videos to remain on the site in some form.