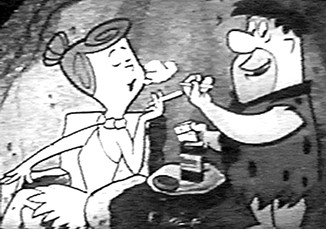 Hey, wait a minute! When did they start smoking? And... er... how?
"In 1927 talking pictures were born, and suddenly directors needed to give their actors something to do while they're talking. Cary Grant and Carole Lombard lighting up, Bette Davis a chimney, and Bogart, remember that first picture with him and Lauren Bacall? ... She shimmies through the doorway 19 years old, pure sex, and says, ‘Anyone got a match?’ and Bogie throws the matches to her, she catches them. Greatest romance in the 20th century, how did it start? Lighting a cigarette."
— Nick Naylor, Thank You for Smoking
Advertisement:

You're enjoying a movie, a TV show, a book, a comic when suddenly out of nowhere one of the (presumed non-smoking) characters lights a cigarette without any real reason. It's not part of the plot, it doesn't tell you anything about the character or it is in fact the first time in the entire work that a character is revealed to be a smoker. Often, the character will never light up again, and their smoking will never be discussed again. Thus making it a grave Series Continuity Error.

Welcome to the world of Random Smoking Scenes.

In other circumstances a smoking scene can be useful to the plot. A character is nervous, wants to impress people, just had sex, is a well known smoker (Winston Churchill, Fidel Castro, Humphrey Bogart can not be portrayed as non-smokers), is a rich business executive, a classy, intellectual pipe smoker, a Native American making peace with other tribes or an evil person. Or he's just a badass. Or the story is a Period Piece set in an era when Everybody Smokes. Or he needs access to fire and a cigarrete is the only option. However, the random smoking scene has no real purpose and could have easily been left out the story without affecting the plot. In a few instances it even becomes pointless padding. Sometimes it even makes no sense because the story takes place in a time period when tobacco hadn't yet been introduced, or the character smokes in an area where it is normally not allowed. In other circumstances it's even highly questionable because the story is actually aimed at or popular with children or teenagers. Let's face it: there's no real necessary reason to have little children smoke on screen. It's Troubling Unchildlike Behavior that could easily be faked or avoided on screen, without hurting the story.

Most random smoking scenes tend to be included in a work for one of a couple prominent reasons: