Of Course I Smoke 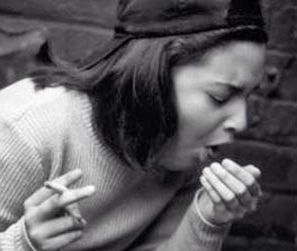 Someone who doesn't smoke is, for whatever reason, trying to act like they do. They light the cigarette, take a big drag and...

This, of course, completely ruins the act. Most commonly done by teenagers trying to look cool, but sometimes done by adults in order to maintain The Masquerade. Compare Of Course I'm Not a Virgin.