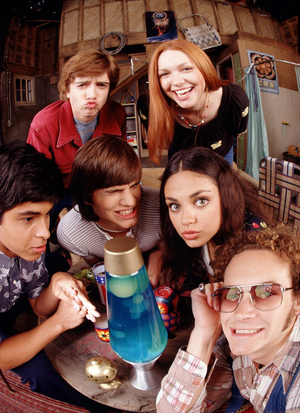 The whole gang.note Top, from left to right: Eric, Donna. Bottom: Fez, Kelso, Jackie, and Hyde. Not pictured: Laurie
Hangin' out, down the street
The same old thing, we did last week
Not a thing to do, but talk to you
We're all alright! We're all alright!
- Big Star, "In The Street", covered for the show by Todd Griffin (Season 1) and Cheap Trick (Season 2-8)
Advertisement:

That '70s Show is a sitcom about teenager Eric Forman and his friends and family living their lives in Point Place, Wisconsin from 1976 to 1979. Remarkably, despite only three years passing through the whole series' universe, it ran for eight seasons on Fox from 1998 to 2006, becoming the network's second-longest-running live-action sitcom after Married... with Children, as well as the final series from Carsey Werner to end its run (indeed, they haven't done anything since then).

Part of the humor came from anachronisms playing off modern audiences, such as the amazing video game graphics of Pong. The show's recurring Running Gag was that the teens often went down to Eric's basement for a "circle." Even though it was never (explicitly) stated what they were really doing down there, you can pretty much guess (the camera in the circle represented the "item" being passed around). The occasional lighter being flashed and/or puffs of smoke billowing in the background help, too.

The show also employed other techniques such as scene transitions of the actors dancing in front of colorful backgrounds, split screens, scenes shown from a singular point of view (expressed through a handheld camera) and fantasy sequences.

Fox attempted to get the ball rolling on a spin-off series, That '80s Show, in early 2002, but it only lasted half a season before going off the air after failing to gain a wide audience.

On the 8th of October 2021, it was announced that Netflix had ordered a new spin-off

for the series, That '90s Show. The series will focus on Eric Foreman’s daughter. Kurtwood Smith and Debra Jo Rupp are set to reprise their roles as series regulars, while other former cast members will return in guest appearances.

open/close all folders
Tropes A to G
Kitty: You are just the sweetest man alive. (leaves)
Red: (takes one last look around Hyde's house) FUCK!
Tropes H to P
Tropes Q to Z