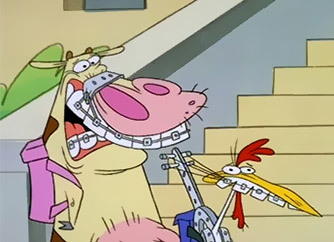 If some character has teeth in need of orthodontic correction, it's pretty unlikely you're going to see them in regular, boring old braces. After all, we see those all the time in Real Life — how dull and boring! Instead, poor crooked-teethed Alice or Bob is going to be saddled with this monstrous orthodontic device that sticks out of their mouth, takes up half their face, and brands them as a nerd/dork/geek for the rest of their formative years. Yes, be prepared for the be-headgeared character to be a stereotypical nerd, or at least take on a few nerdy mannerisms. No popular or cool kid ever has to wear one of these ridiculous things.

Due to the rather blatant character attributes the headgear usually implies and orthodontic technology having improved significantly since the nineties,note For example, headgear is much less commonplace. And where it is still used, it's often used only at night, meaning that the kid won't have to wear it to school. Headgear does work better when worn continuously, but because of this trope, kids will refuse to wear it in public. Plus, invisible braces and even clear plastic trays that don't even have to be procured from an orthodontist are a thing. this is now more or less a Discredited Trope - possibly also due to the fact that so many kids spend at least some of their adolescence wearing some kind of brace these days. It's rare to see such headgear now except for the sake of a one-off gag. Curiously, regular braces are still somewhat rare on TV. Guess they must all have the invisible kind.

He also went around dressed as the Terminator, on grounds that he's now technically a cyborg.