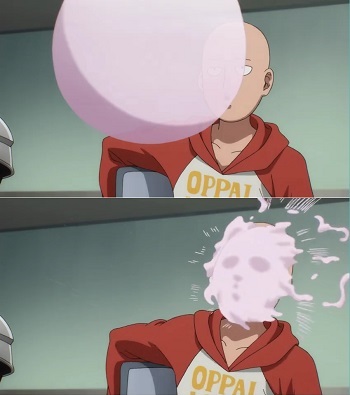 The bad guys end up like his bubbles when he's done with them.
In fiction, any time a character is chewing gum it's usually bubblegum, and when there's bubble gum a character is probably going to blow a bubble. The bubble will then pop for comedic effect, often covering the face and clothes of the person chewing gum or in extreme cases their entire surroundings. The bubbles being blown are often far larger than what is possible in real life. The gum is almost always shown as being colored pink.
Advertisement:

This can also be used to indicate that a character isn't taking a conversation or issue seriously; they will blow and then pop a bubble during a conversation to draw attention to how casually they are taking the issue. It helps that bubblegum has something of a childish flair to it, meaning the chewer comes across as bratty or carefree.

May result in Gum In Hair and Covered in Gunge. Should not be confused with Chew Bubblegum.