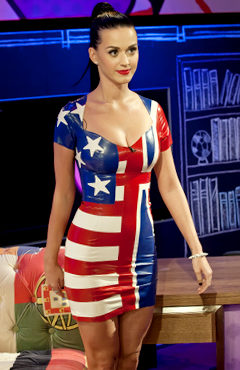 My Pop Star, 'Tis of Thee
"I'm kind of a good girl - and I'm not. I'm a good girl because I really believe in love, integrity, and respect. I'm a bad girl because I like to tease. I know that I have sex appeal in my deck of cards. But I like to get people thinking. That's what the stories in my music do."
Advertisement:

Katy Perry is an American pop singer and songwriter. Katheryn Elizabeth Hudson, who is known as Katy Perry was born as the second child to Christian pastor parents Keith Hudson and Mary Hudson (née Perry) on October 25, 1984, in Santa Barbara. Along with her older sister and younger brother, she was raised in a deeply religious family.

Growing up listening to only gospel music, her first experience of performing was singing in church, thus a passion for music grew. At the age of fifteen, Perry began visiting Nashville, gaining experience in recording demos and songwriting. At some point, Katy signed on to Christian record label Red Hill, and at the age of 17, she released a Christian pop album under her birth name but wasn't successful.

Perry then moved to Los Angeles, collaborating with producer Glen Ballard though she was unable to secure a lasting record deal. She signed to Columbia Records in 2004 but was dropped when this proved futile. However, an executive at Columbia recommended Katy Perry to Jason Flom, Virgin Records’ chairman, resulting in her singing for Capitol Music Group. (Oh, and did we mention that she was also a background vocalist for "Goodbye for Now" with P.O.D.?)

She recorded her first album One of the Boys and in the spring of 2008, released the lead single I Kissed a Girl, which proved to be a smash hit at number one slot in several countries where other hit singles followed, the album becoming a commercial success. Her second album, Teenage Dream spawned more huge hits where many awards and music industry records followed. In 2012, she released the documentary feature film Katy Perry: Part of Me, and Teenage Dream was re-released to promote the film.

In 2013, she struck back with the fierce "Roar" and released her third album, Prism. In 2015, she performed at the Super Bowl XLIX halftime show and brought the largest ratings in the history of the Super Bowl. In 2017, she was named as one of three judges for the 2018 ABC revival of American Idol, with Luke Bryan and Lionel Richie.

As noted by certain people, she looks like Bettie Page and Zooey Deschanel. Katy herself

declared she'd like to make a movie where she and Zooey played Creepy Twins, and later cast her in the video for "Not the End of the World"

on the basis of this resemblance. Oh, she also used to own a cat named Kitty Purry who had its own blog. Yes, really

She married English comedian Russell Brand in 2010, but they divorced in early 2012. She is currently engaged to English actor Orlando Bloom, and they have a daughter together.

I used these tropes and I liked them; the taste of their cherry Chap-Stick!

When the cover of the original song takes the meaning of the lyrics an extra mile.

When the cover of the original song takes the meaning of the lyrics an extra mile.